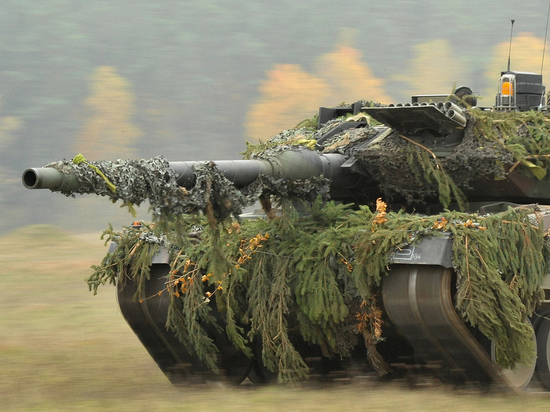 Ukraine, according to its semi-official media, has plunged into a state of victorious euphoria. The heavy tanks promised by Germany are deliberately called "Tigers" by the announcers of the nationwide telethon "United News" (in fact, they will deliver "Leopard-2 - auth.") Obviously, by analogy with the German armored monsters of the Great Patriotic War. "Talking heads" vying with each other predict "the direction of the main blow" - either in the part of the Zaporozhye region not controlled by Kyiv, or in the right-bank Kherson region; Donetsk region is "not touched" yet. However, some Ukrainian military analysts assess the upcoming change in battle tactics from a slightly different angle. Say, the General Staff of the Russian Armed Forces is unlikely to wait until the armored forces of Ukraine acquire "Abrams", "Leopards" and their relatives of the Soviet-built T-72B from Morocco. General Valery Gerasimov, who is now responsible for the success of the NMD, will hit the APU first. And the massive offensive of the Russians will allegedly begin from the territory of Belarus.

- Son! If they try to foist a summons on you, refuse to take it! Do not go to that war in any case!

A woman who looks about 50 years old persistently advises a young guy with a scooter met on a concrete masonry through the railway tracks how to circle around the finger of "these military registration and enlistment office".

You might think someone will ask me! - her interlocutor tries to complete the spontaneous dialogue.

The “calm mobilization”, which head of the Ukrainian Defense Ministry Oleksiy Reznikov announced two days ago, does not really look like it. Young people in large cities are "raked in to the fullest." They do not hesitate to hand over subpoenas ... even during the funeral of another serviceman of the Armed Forces of Ukraine.

The border with the Republic of Belarus with a length of 1084 km is being constantly strengthened. Especially in areas that were exposed to radioactive contamination in April-May 1986. In the most impassable places, mines are placed, anti-tank gouges are installed. Some home-grown businessmen who "fortunately invest" in the creation of several lines of defense are trying to assess the quality of artificial interference with their own eyes. Already someone who, but they have perfectly learned to visually determine the size of theft in the manufacture of metal "hedgehogs" with concrete pyramids. Some even try to manually rearrange these "interferences" in order to prove to military foremen the need for "rework".

- The situation is very bad on the Belarusian side, - my "personal banker" Vitaly says excitedly. At which the MK correspondent has been exchanging dollars and euros for 20 years, no less.

- Where is the information from?

- Every day I communicate with former colleagues in Belarus, they went through the "urgent" together with them on the border with Afghanistan. Panj. Have you heard of this city?

- I still remember when it was called Kirovabad...

- The guys say that the Belarusian army is not in the mood to go to war with its neighbors. Lukashenka is “not perceived” either in the army or among civilians. Everyone knows that the last elections were "made".

- So straight and all?

- 20 percent of Belarusians still support him, for the sake of stability. Minister of Defense Khrenin (Viktor Gennadyevich Khrenin - 51-year-old lieutenant general), as my sources say, listens more to the Russian General Staff than to the “father”. They will command him to “move out”, - he will stretch out along the line: “There is a move out!”.

The press secretary of Svetlana Tikhanovskaya, Anna Krasulina, during a recent interview with a Ukrainian TV channel, convinced exactly the opposite. Say, in fact, it is Lukashenka who is the main initiator of the future offensive against Ukraine. It's just that he, with his vast political experience and "bestial instinct for self-preservation", absolutely amazingly "leads the role" of the Father of the Nation, resisting the "pressure of the Kremlin" with all his might. That is, the President of the Republic of Belarus is many times more "hawk" than the pro-Russian General Khrenin.

My old acquaintance is also nervous about the military from the Carpathian region transferred to our city in case the “Belarusian Front” opens: “They were placed in an empty bible college, without even trying to “disguise” them as Protestant believers. After all, it was possible, at least for duty at the checkpoint, to change into civilian clothes. And they have been talking loudly since the very morning in their Ivano-Frankivsk dialect: “Vasyl, are there cigarettes in tebe? Nee? Then run to the supermarket! Here, some voluntary "gunner" will take it and pass the coordinates of this military unit to Moscow. Next to them, across the road, are blocks of high-rise buildings, but Iskander will not make out who is his own and who is a newcomer ... ".

As recently as the day before yesterday, an MK correspondent in one of the stores observed what exactly the military was buying.

“Hata” or “disposing” is in their, military, language, a barracks. Christmas decorations this year are still not removed from the shelves of Ukrainian stores. Moreover, on the radio, among the life hacks in case of a power outage, these same garlands on mini-batteries are recommended to my compatriots. Like, thanks to them, the apartment will not be as creepy and uncomfortable as in pitch darkness after December 10 last year ...

"Having stocked up" in the "Aurora" (where they sell all sorts of inexpensive stuff), a group of military men is forced to linger at the cash register. Computer 'switched off'. The senior administrator called for help is also unable to "speed up the process."

Much to my surprise, one of the officers, in a flat voice, begins to suggest which keys to press in turn to restart the system. His comrade, apparently, is also related to aerial reconnaissance. That is, it works with drones.

“Having leveled the situation,” the satisfied senior admin jokingly suggests that the captain come to them more often.

- Good. I will cook borscht for you.

- And I, if you do not mind, I'll get a job as a night director. That is, a security guard.

-... I could also do some work for you! - the chief sergeant, who had been silent before, responds.

- I feel that everyone here is set to win! - sums up the "chief-administrator".