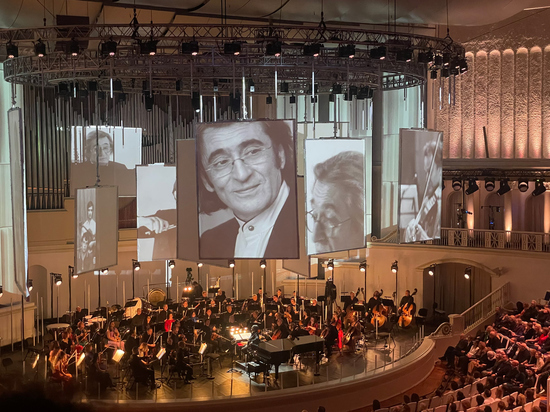 Yuri Bashmet celebrated his 70th birthday. By tradition, he performed on the stage of the Tchaikovsky Concert Hall, and, as always, the program was kept secret until the last moment. However, the maestro hinted that the concert would be based on improvisation. The surprise happened. The audience was shocked by the set design: large screens hung over the orchestra, on which, while the music was playing, rivers flowed, fire blazed or mountain ranges swept past. And in the pauses, they showed photographs that were commented on by the hero of the occasion. Even the experts did not immediately guess the works that were performed - the improvisation lasted almost three hours.

A large-scale installation of rotating screens and glowing lines of different colors that grew on the stage produced the desired effect. To the eyeballs, the crowded hall greeted the hero of the day standing up, after which he thoughtfully looked up, pointing at the screens with his bow. As if by magic, children's pictures of Yuri Abramovich, photos of his parents and older brother appeared on the screens. Viewers looked at the black-and-white images through the window frames. Each picture had its own, special.

At the same time, a recording of an interview was shown, where Bashmet tells personal stories. He remembered, for example, his grandfather, who during his service in the army was the leader, and his beloved mother, through whose efforts he got into the conservatory, thereby fulfilling her childhood dream (she also studied music, but did not make a professional career). After such an introduction, the musicians performed a lyrical composition by Brahms, which was almost impossible to guess in the free improvisation of the maestro.

Each subsequent musical sketch was preceded by a story told by its hero and photographs. The result was an autobiography, illustrated musically, visually and literary. The music for each chapter of this book was chosen with meaning. Mozart, Beethoven, Tchaikovsky, Bach, Schubert, Mahler, Prokofiev - all the greats were in place here and not by chance. For example, the story of acquaintance and joint performances with Mstislav Rostropovich was illustrated by Beethoven's 3rd symphony, which two musicians once played together on stage. The case, it must be said, is dramatic. “I thought they would send me to Siberia!” Yuri Abramovich commented on this memory.

And there was this. The young violist was to perform with the venerable and honored Rostropovich. Bashmet, then a second-year student at the Moscow Conservatory, stared at the conductor's fingers so gracefully flying in the air that he forgot to step in at the right moment. However, he was not the only one dreaming, but other musicians as well. Rostropovich, however, did not lose his head and drew out the melody, stretching out the introduction before the alto solo. The musicians immediately came to their senses and played their part. As a result, they bowed out eight times. During the first bow, Mstislav Leopoldovich joked: “If you don’t know music, you must be able to count.” Realizing how depressed the young musician was by his oversight, Rostropovich reassured: "Nothing, it happens to everyone."

From such sketches dedicated to the Beatles, about which Bashmet was crazy in his youth, to friends with whom he performed a lot (Valery Gergiev, Alexander Tchaikovsky, Viktor Tretyakov), a musical, and at the same time very human autobiography was gathered. At some point, Yuri Abramovich gave way to the conductor's podium to a young colleague, and he himself took the viola. She played the solo part in the Bach concerto and the maestro's daughter, pianist Ksenia Bashmet.

The last chord was video congratulations from the relatives of the maestro - the wife of Natalia Melnik, with whom they have been together for almost 50 years, children and grandchildren. And the gentle adagio from Aram Khachaturian's "Spartacus", flying around the hall in a dance along with snowy, almost abstract shots shown on the screens.