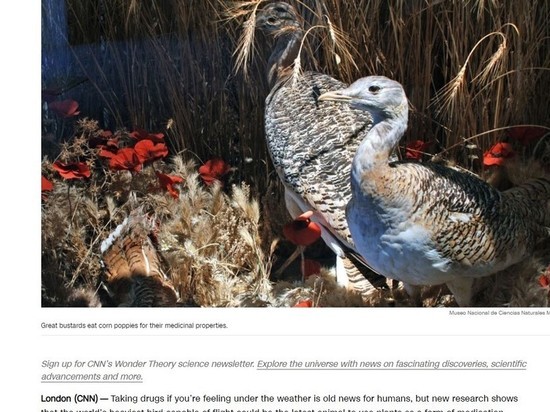 Taking medication when you're not feeling well is the norm in the human world, but new research suggests the world's heaviest flying bird may be another animal using plants as medicine.

Researchers from Madrid in Spain looked at data from 619 bustard feces and found that two types of plants had more than other foods in their diet. At the same time, these herbs had a bright “antiparasitic effect”.

“Here we show that bustards prefer to eat plants with chemical compounds that have antiparasitic effects,” Luis M. Bautista-Sopelan, a scientist at the Madrid National Museum of Natural Sciences and lead author, said in a press release.

Found in parts of Europe, Africa and Asia, the great bustard is reportedly listed as vulnerable on the International Union for Conservation of Nature's Red List, with about 70% of the world living in the Iberian Peninsula.

A study published Wednesday in the scientific journal Frontiers in Ecology and Evolution shows that great bustards ate the poppy (Papaver rhoeas) and psyllium bruise in abundance. People, too, used to use poppy for its medicinal properties as a sedative and pain reliever.

After analyzing the plant extracts, the researchers found that both plants had antiparasitic properties, which they tested against three common parasites in birds: the protozoan Trichomonas gallinae, the nematode Meloidogyne javanica, and the fungus Aspergillus niger.

State services in the MFC will be provided by biometrics

Google to launch continuous scrolling of search results on desktops

Cooler Master has announced a capsule for working on a computer

The number of Telegram Premium subscribers has exceeded one million

Reuters: US authorities are investigating animal cruelty by Neuralink