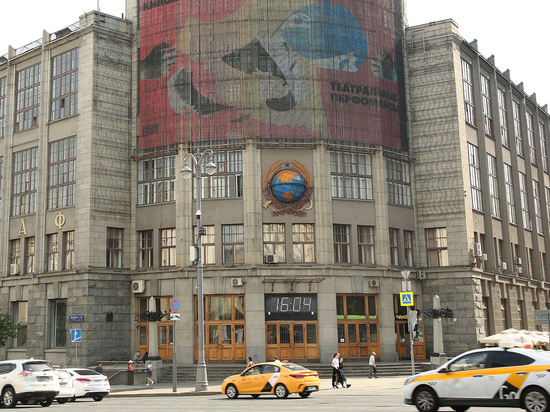 Briton Chipperfield promised to revive the historic building on Tverskaya, but it seems that we will have to do without him

In March, in the wake of a massive outflow of foreign business from Russia, many architectural projects prepared by specialists from other countries were frozen and canceled. One of the loudest news then was the message that the world star architect, Briton David Chipperfield is suspending work in Russia. Months later, the statement is still seen on the website of the Chipperfield Bureau, which did not prevent the presentation of the Telegraph reconstruction project, which the Briton undertook in 2020.

At the profile exhibition at the Winzavod dedicated to restoration issues, the presentation of the Central Telegraph project became one of the most notable events. There are several reasons for this. Firstly, the telegraph is a landmark building, revolutionary for its time, one of the symbols of the capital and the country, its image can be found on Soviet stamps and postcards. Secondly, star architect David Chipperfield was supposed to update it, and on March 2 he condemned Russia's policy in Ukraine and called the actions of the Russian government "unjustified." The announcement of the presentation created intrigue: did the architect change his mind?

This question has remained up in the air. The Briton himself did not appear at the presentation - even online. However, the developers presenting the concept referred to the eminent architect as if nothing had happened, and he continues to work on the project. However, it was announced that the team was joined by the same design bureau, which also participated in the implementation of the project for the reconstruction of HPP-2 by the Italian Renzo Piano. The project of updating the Central Telegraph itself was outlined in general terms.

What's to come? Not restoration or reconstruction, but revitalization. This term denotes in the urbanist the revival of urban space: re ... - renewal and vita - life, literally - the return of life.

The architect Ivan Rerberg built the building in the form of a closed square. Only the first floor was public, where operating rooms, a library, a dressing room and a dining room were located. The rest of the premises were production - hardware. In the 1930s, for example, the headquarters of the All-Union Radio was located there, it was from here that Vyacheslav Molotov announced the attack on the USSR by the German army, and in May 1945, Yuri Levitan about the surrender of Germany.

In recent years, life has barely flickered in the Central Telegraph. The communication center has lost its original functions - simply because the technology is gone. The space was rented out to dozens of different firms. A couple of years ago, the inside of the building made a depressing impression: it was “cut” into many small offices, the seven-meter streams were covered with drywall at a level of 2.5 meters, and the historical interiors were partially lost.

There were not so many specifics at the presentation about exactly how they will breathe life into a historic building, which is a monument of cultural heritage. No new functional task related, for example, with modern communication technologies was announced. However, they promise to clear the first floor of “layers”, return “air” there and make it a public space. The public will also have access to the observation deck, which offers a picturesque circular view of the center of Moscow. The courtyard will also be opened to everyone - there will also be a public space. The rest of the space will be occupied by offices and shops.

Nevertheless, it was promised that they would replace engineering communications with modern equipment, install energy-saving lamps, a water purification system and master the underground territory - there will be a parking lot. And they will definitely restore the famous rotating globe, which adorned the building for many years, until it was replaced in 2010 with a glass one. Now the old globe with a metal frame will be returned to its place after the corrosion is eliminated and the mechanism is restored.

It seems that only the name remains of David Chipperfield in the project. The ghost of the eminent architect still attracts attention, but, it seems, is not responsible for the "return of life" to the Central Telegraph.

By the way, the timing of the project has also changed. Initially, the renovated building was planned to open in 2024-25. Now we are talking about 2026-27, when the Central Telegraph will celebrate its 100th anniversary.