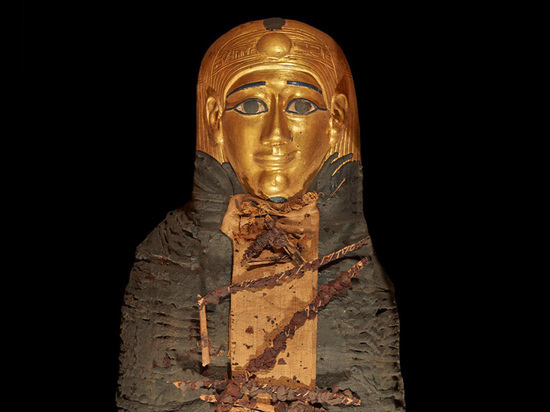 Digital scanning has helped scientists unlock the secrets of a 2,300-year-old mummy. A team from Cairo University concluded that the teenager who lived in ancient Egypt was rich, and his mortal remains could be evidence that non-Egyptians were also mummified.

A new digital scan has revealed intimate details about a teenage boy who was mummified some 2,300 years ago.

A group of scientists led by Sahar Salim, a professor of radiology at the Faculty of Medicine at Cairo University, came to the conclusion that the boy and his family, who lived for thousands of years, were rich and had a high social status, since the mummy's body was decorated with 49 precious amulets.

Professor Salim says: “Many of the amulets were made of gold, while some were made of semi-precious stones, baked clay or faience. Their purpose was to protect the body and give it vitality in the afterlife.”

The team dubbed the mummy the "Golden Boy". It was first discovered in 1916 in a cemetery used from 332 to 30 BC. in Nag el-Hassey in southern Egypt. Until now, the mummy was kept without research in the basement of the Egyptian Museum in Cairo.

Amulets on the body included a golden scarab heart stuck in his throat and a golden tongue in his mouth.

Sahar Salim says that the amulets were “beautifully stylized in a unique arrangement of three columns between the folds of the wrapper and inside the body cavity of the mummy. These include the eye of Horus, the scarab, the horizon amulet akhet, the placenta, the knot of Isis, and others.”

Salim and her team used CT scans to examine the insides of the mummies without unwrapping them.

The study showed that the boy was about 14 or 15 years old, based on the degree of bone fusion in his skeleton and the absence of wisdom teeth in his mouth. Using the latest advances in CT scans, the study also determined that the teen had not been circumcised.

This is relatively uncommon in mummies, experts say, and suggests that the teenager may not have been Egyptian, which could add to the evidence that non-Egyptians may have been mummified as well.

Commenting on the study, Professor Salima Ikram, head of the Department of Egyptology at the American University in Cairo, says: “The lack of circumcision is interesting because it can tell us something about his ethnicity – Egyptians typically got circumcised before the age of 13.”

Salima Ikram, who was not involved in the study, added: “This may indicate that foreigners adopted Egyptian burial practices – and we know that the Persians did. It could come from any number of places. He could be a Nubian, a Greek, a Persian, anyone from Asia Minor where they didn't get circumcised. What we can say is that he probably wasn't Jewish."

She noted that only the latest CT scans can reveal this level of detail in a mummified body. But she warned, "I wouldn't hang it all on one fragile foreskin."

One of the amulets found during the study was in the shape of two fingers and placed next to the boy's penis.

According to the British Museum, such amulets represent the hand of the embalmer. Professor Sahar Salim's team believes it was placed next to the embalming incision in the hope that it would help the body heal in the afterlife.

But Ikram is less certain about this interpretation. She said: “Amulets with two fingers appear in other parts of the body. We don't really know what it is. You could interpret this as the midwife's hands when she uses two fingers to remove mucus from the baby's mouth. According to the Egyptians, when you die, you are reborn.”

She added: “For the Egyptians, the process of mummification was a metamorphosis, when you turned from a human into a divine being, and the flesh of the gods was of gold.”

The scan showed that the boy was wearing sandals. Salim says: “The sandals were probably meant for the boy to come out of the coffin. According to the ritual Book of the Dead of the ancient Egyptians, the deceased had to put on white sandals to be pious and clean before reciting its verses.”

Professor Ikram highly appreciated the detailed study. “It's great to have a study with this level of detail. This is part of creating a larger dataset for Egyptologists to better understand the lives of ancient people and their religious and cultural beliefs.”

Why you shouldn't save on smartwatches