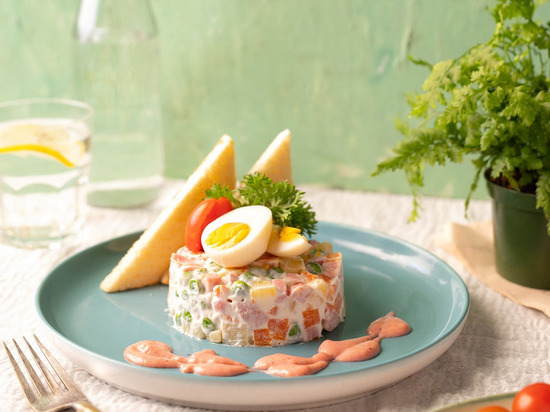 By the New Year, we are all waiting for gifts from Santa Claus and tend to believe in miracles. One of them happened just the day before. Food market experts announced that for the first time in recent years, Olivier salad, a dish that no New Year's feast can do without, will become cheaper in Russia. True, compared to 2021, the savings are trifling, only 1.6 rubles, but all the same, against the backdrop of inflation rampant in the outgoing year, it’s nice. However, on closer examination, this miracle raised questions. "MK" checked the prices.

On the eve of the New Year, Rusprodsoyuz specialists found out that the cost of products for making Olivier salad this year will fall in price by about 0.4%.

To prepare this traditional dish for 4 people, they took as an experiment 500 grams of potatoes, 200 grams of carrots, 4 chicken eggs, 300 grams of boiled sausage, 300 canned green peas, 100 grams of onions and 200 grams of mayonnaise. The following figures were taken as the basis for the calculation: potatoes - 30 rubles per kilogram, carrots - 33, cucumbers - 101, onions - 30, 10 eggs - 78 scars. Where did these prices come from? There is no more recent data from the Rosstat report for October.

This year, many ingredients, indeed, have fallen significantly in price. Compared to 2021, potatoes - by 33%, carrots - by 28%, cucumbers - by 21%. Summed up, according to Rosstat, perhaps chicken eggs, which in comparison with September rose by 7%.

In general, food is served! Olivier for 4 servings, according to experts, will cost 0.4% cheaper than a year earlier. In terms of money, the savings will be 1.6 rubles. A trifle, but still nice.

And it will become even more pleasant if we take into account that our people, who are not very rich for the most part, in retail chains have long been oriented towards goods at a discount and, first of all, “break” to those shelves on which promotional products are displayed. Moreover, they are usually of high quality and quite cheap.

In almost all supermarkets, potatoes in bulk today cost not 30 rubles, but 19, carrots - not 33, but 16. If we take such prices into account, then our Olivier will become even cheaper.

But that's where the good news for consumers ends, and then a real headache begins with arithmetic. Let's start with the fact that according to the forecast of the Ministry of Finance, the real disposable income of the population this year will decrease by 2.2% (according to the August calculations of the Ministry of Economic Development - by 2.8%) and it turns out that we will not actually feel a decrease in the cost of Olivier salad - after all Our income has dropped even further!

In addition, Rusprodsoyuz's calculations are made according to October figures, and the hostess will prepare a salad for the festive table on the last day of December. And for two months - do not go to a fortuneteller! - A lot can change, and not for the better for the consumer. For sure, almost all products will rise in price.

Vegetables that have fallen in price by 30 percent or more in the previous period are a real agrarian anomaly, farmers screaming that they do not recoup their costs for sowing. For example, potatoes, which are still harvested even in the Central Non-Black Earth Region, cost 8 rubles a kilogram per field. Therefore, it is sold in retail chains at a purely symbolic price. The same goes for the rest of the vegetable line. Whereas a year ago, vegetables from a producer from that same field cost four times more.

In general, by the New Year and even earlier, all the ingredients for the salad will rise sharply in price. And the peasants can be understood: they should return bank loans taken under the spring sowing campaign. In terms of labor costs, it cost them 50% more (sanctions, logistics, etc.) than last year, but sales prices are 3-4 times lower.

- The rush of prices for vegetables will begin by mid-December, - says Igor Abakumov, candidate of economic sciences, host of the "Village hour" program. - They will rise by 20 percent, which is not a critical point in the current conditions. The harvest will no longer come from the field, but from the storage facilities - washed and packaged. The only consolation is that the prices for vegetables will drop immediately in the first days of January.

- Why? If something rises in our country, then it is already serious and for a long time ...

- On the eve of the holidays, trade and manufacturers will be allowed to earn some extra money, and then the price rollback will follow.

Not all farmers agree with this statement. They either pan, raise prices, or disappeared, that is, go bankrupt: banks do not particularly stand on ceremony with those who do not repay their debts.

In general, Olivier salad is not red caviar and not splashes of champagne, we have enough money for it anyway. But the fact that we will be able to bungle it on the cheap is hard to believe!