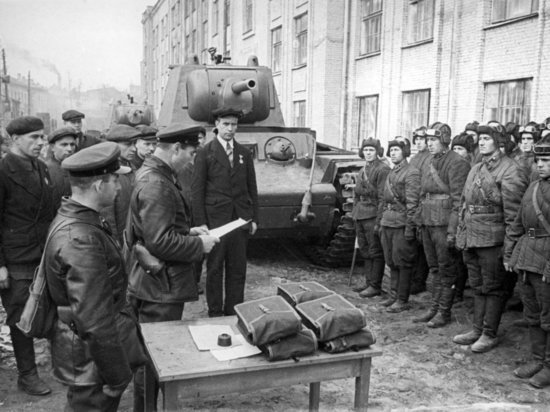 After the attack of Nazi Germany on the Soviet Union, already on June 29, 1941, the USSR began a comprehensive strengthening of the rear of the Red Army and the subordination of all activities in the country exclusively to the interests of the front. Almost all industrial and industrial life was included in the military system.

The State Defense Committee was created, headed by the Chairman of the Council of People's Commissars of the USSR, Joseph Stalin. He had full power in the country.

For the direct leadership of the armed struggle on the fronts, the Headquarters of the High Command was created, which was then transformed into the Headquarters of the Supreme High Command under the chairmanship of Stalin. He became People's Commissar of Defense and Supreme Commander of the Armed Forces of the USSR. On July 16, 1941, the institute of military commissars was restored in the Red Army - "representatives of the party and government in the troops", and the positions of political officers were introduced in companies and battalions.

Turning the country into a fighting camp

An integral part of the program for turning the USSR into a single combat camp was mobilization - the deployment and increase in the combat readiness of the Soviet Armed Forces. In accordance with the Decree of the Presidium of the Supreme Soviet of the USSR of June 22, 1941, recruits from 1905 to 1918 were subject to mobilization. The mobilization took place in the conditions of a great patriotic upsurge, there was a massive filing of applications for voluntary entry into the Soviet Armed Forces. In just one week, 5.3 million people were mobilized.

By December 1, 1941, the active army was replenished with 291 divisions and 94 brigades. In total, over 20 million people were drafted into the army during the war years, the flow of volunteers never dried up.

However, out of almost 12 million conscripts who were registered in 1941, more than 4 million were uneducated, some could not even read and write, the vast majority did not even have elementary knowledge of military affairs. Therefore, there was an acute shortage of machine gunners, mortarmen, artillerymen, radio operators, drivers, tractor drivers, as well as technicians and engineers in the army. Nevertheless, the task was set to quickly deploy a multimillion-strong army and bring it to combat readiness.

Extermination battalions became a special form of the mass patriotic movement during the Great Patriotic War. As early as June 24, 1941, the Council of People's Commissars of the USSR adopted the Regulations on the creation on a voluntary basis of fighter battalions at the forefront to fight against enemy sabotage and airborne groups. By the end of July, 1,755 such battalions with a total strength of over 328,000 men had been organized in the USSR. In total, about 400 thousand people visited them during the war.

One of the forms of direct participation of ordinary citizens in the war against the German invaders was the people's militia. In a short time, more than 1 million people joined its ranks. About 60 divisions of the people's militia were created, of which 37 took part in the hostilities.

However, the mass popular movement in the conditions of war turned out to be an ambiguous phenomenon. On the one hand, it certainly reflected the patriotic upsurge of the Soviet people. On the other hand, poorly armed and hastily trained divisions suffered huge losses in battles. Significant damage was also caused to the country's economy, since a large number of workers and employees were cut off from production. Therefore, as tension on the fronts decreased, the country's leadership less and less turned to recruiting the militia or trained it and transformed it into regular units.

When mobilization was announced in the USSR on June 22, 1941, in addition to those who were called up, young people who were already 18 years old could become volunteers.

When a citizen was called up for military service, he had to immediately leave the workplace, shave his head, take identification documents, and go to the recruiting station.

Thousands of young people showed up at the assembly points in the first days of the war. According to historians and eyewitnesses, many of them expressed concern that "the war will end soon and it will not be possible to become a hero."

The reality turned out to be much less optimistic. Catastrophic defeats and heavy losses in the first months of the war forced the Soviet leadership to then mobilize all men aged 17 to 50 years.

Also, restrictions were lifted on the mobilization of children of repressed and unreliable elements - tsarist officers, priests, nobles and Cossacks. Nevertheless, the flow of volunteers did not dry up: often people who were officially allowed not to serve in the army due to disability, age or other reasons, tried to forge documents in order to join the Red Army.

Despite the general mobilization, many residents of Siberia and the Far East were not mobilized. They were left in reserve in case of war with Japan.

Many people know that during the war years there was such a thing as "booking" - the official issuance of a document, according to which a person was not to be sent to the front. Several categories of citizens were exempted from mobilization: those working in harvesting and logging, river navigation and defense factories. Some artists, actors and athletes were also excluded from being mobilized. Soviet citizens of German, Romanian, Finnish, Greek, Hungarian, Chinese and Japanese origin were also not mobilized for military service. Instead, they were sent to construction battalions.

After the war, the leadership of the USSR realized that 11 million soldiers were too many for peacetime. Therefore, in the period 1946 to 1948, there was no conscription for military service. Instead, the country's youth were "mobilized" to restore the country's industrial and agricultural potential.

During the Great Patriotic War, active work on the ideological front did not stop. Political and educational activities were radically rebuilt and focused on the formation of three main qualities among the fighters: irreconcilable hatred of the occupiers; firm confidence in the inevitability of victory; readiness to make any sacrifices and losses for the sake of victory. All measures to strengthen the political influence of the party in the army were carried out at the direction and under the control of the Central Committee of the All-Union Communist Party (Bolsheviks) (CC VKP(b).

In the period from 27 to 29 June 1941, the committee decided to mobilize communists and Komsomol members to the front.

Each local regional committee and regional committee of the CPSU (b) had to mobilize from 500 to 5000 communists within three days and send them to the People's Commissariat of Defense. In the first year of the war alone, the Party sent at least 1 million Communists and about 2 million Komsomol members to the Armed Forces.

In order to make it easier for soldiers to be accepted into the party, candidates were allowed to submit recommendations of three party members with a one-year, and not with a three-year party experience, as was the case before.

In December 1941, the Central Committee of the All-Union Communist Party of Bolsheviks decided to accept all military personnel who distinguished themselves in battle as party members after a three-month candidate period. In total, more than 5 million people joined the Communist Party at the front.