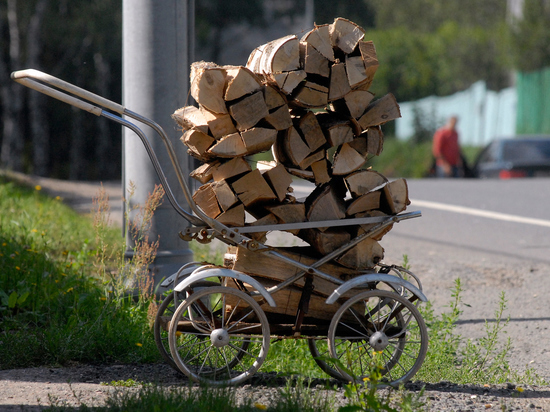 Yesterday it became known that European politicians failed to agree on a price ceiling for Russian energy resources. Moreover, Estonian Prime Minister Kaja Kallas said that she was not satisfied with the too high price ceiling, they say, if you buy oil from Russia for 65-70 euros, then its budget will not suffer at all. And what do the inhabitants of Estonia think about this, who, on the eve of winter, have already begun to steal from each other ... firewood.

“For as long as I can remember, firewood has always been stored on the street with us, even my grandfather put it at the very end of the site in round woodpile, they resembled a haystack in shape. But now, of course, no one makes woodpile on the street anymore, everyone keeps firewood in a barn under lock and key, because it has become very expensive,” says Anika, a resident of Kohtla-Järve, a small town in eastern Estonia.

According to the woman, firewood is used mainly in rural areas. And there have never been any special problems with them, as well as a special demand for them. Even last year, a cubic meter of firewood cost about 60-70 euros.

“Estonia used to strictly observe the green agenda, it was forbidden to heat with anything, otherwise the neighbors would immediately inform, and the police would come and issue a fine, but now such an increase in energy prices that even those who have steam heating at home and are gas or electric boilers. Everyone has cleaned the old stoves, which have not been used for a hundred years, and are heating with firewood,” says Anika.

However, this spring the situation changed dramatically. As soon as Estonian politicians decided to abandon Russian gas, fuel prices jumped sharply in the country. Electricity and gas became more expensive, and then prices for less popular types of fuel also increased - local shale, which is mined in Ida-Virumaa, coal and firewood.

“At first, firewood began to disappear from fire sites in the forest, foresters specially put it there so that tourists who want to relax by the fire, fry kebabs, do not cut down good trees. Then our chief forester spoke in the press and complained that the villagers got into the habit of stealing firewood at logging sites, and then generally began to cut young growth in the forest. Well, now, when winter is on the threshold, they have begun to steal from each other, open the locks on the sheds and steal right from there, ”my interlocutor complains.

- Can I buy firewood now?

Yes, but they are terribly expensive. If last year selected firewood from Germany was sold for 100 euros, now for 150 euros you can only buy raw black alder, which does not burn at all, but only clogs the chimney. My parents bought 4 cubic meters of birch firewood back in the summer, they were sold to pensioners at a social price, very cheap, but in the fall the lock on the barn was knocked down and part of the firewood was stolen, now I have to buy it as it is and at crazy prices.

- Have you contacted the police?

- Of course, but there are a lot of such victims there, they accepted the statement from the father, but they said that the parents themselves were to blame, it was necessary to better protect: put a new lock and hang a video camera. They also advised to insure the remaining firewood, then, if the theft continues, it will be possible to receive compensation.

According to Anika, many residents of Estonia do not understand what is happening in the country, according to ordinary people, politicians compete in Russophobia, and they do not seem to give a damn about the deplorable situation of their fellow citizens and the recession in the economy.

- In Parliament, they discuss only one thing for days on end, how to remove the Russian language from general use. They want to translate all schools and kindergartens into Estonian. It was forbidden to make advertisements in Russian in shopping centers. All officials, deputies, officials, even company directors and other specialists are now required to communicate only in Estonian. We agreed to the point that they began to discuss in the Riigikoku (Estonian Parliament - ed. note) whether two lovers in bed can speak Russian if one of them is an official! And all this nonsense was broadcast on television. Don't we have more pressing problems? Our country has the highest inflation in the world! And unemployment is rising day by day because businesses are shutting down one by one due to the energy crisis. And they talk about such nonsense...

- Does the population receive any financial assistance from the government, given the rise in unemployment and high inflation?

- The poorest receive small subsidies to pay for housing and communal services, but will it save? I recently read that all assistance to the population amounted to 4 million euros, but our country provided the largest assistance to Ukraine in terms of its GDP.