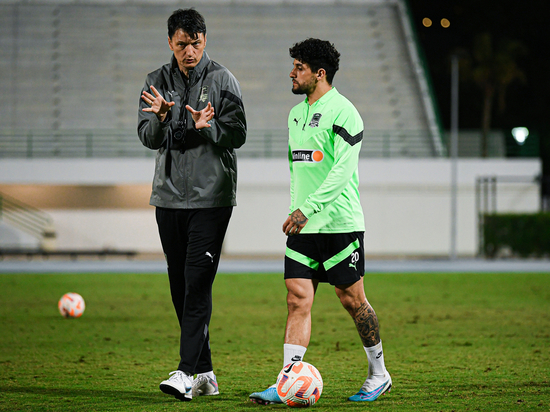 "Bulls" continue to pass the first training camp in the United Arab Emirates. The team of Vladimir Ivic had to play two friendly matches in Dubai. First, the game against Levski was cancelled. The meeting with the Bulgarians was scheduled for the seventeenth of January. According to the press service of the Bulls, the match was canceled by the decision of the coaching staff. Then the game with the Uzbek “Bunyodkor” was postponed from January 23 to January 24 (at the time of this writing, the meeting was not played). The reason for the transfer is not explained. Thus, "Krasnodar" in the first training camp will play only one match on the last day of the camp.

In the meantime, the Citizens have taken second place in the ranking of the best European clubs for the development of young footballers. The research was carried out by the Transfermarkt portal. The top 20, in addition to the bulls, included three more Russian teams: Rostov, Lokomotiv and Wings of the Soviets. When compiling the rating, the number of players under the age of 23 played for the main team and the minutes they spent on the field were taken into account. The Bulls, with 31 players and 13,284 minutes played, were second only to the Belgian Anderlecht. This rating, of course, weakly correlates with the football achievements of clubs in national and international tournaments.

A number of media reports that at the moment the "citizens" have completed the winter transfer campaign. Others write that the club is looking for another central defender. This wish was expressed by Ivic. This transfer will be the last this winter. A defender is being sought in the Balkan market. It is possible that the club will part with one of the players in the central zone.

But the pupil of "Krasnodar" Irakly Manelov, most likely, will go to the Tula "Arsenal". The First League club will take the twenty-year-old footballer on loan with an option to buy. One of these days, the attacker should arrive at the location of Arsenal, which is at the training camp in Turkey. Manelov is well known to the new head coach of Tula, Alexander Storozhuk, for his joint work in Krasnodar. In addition, both were born in the village of Vyselki, which is located not far from the regional center of the Kuban.

Rumors continue to circulate in the media about the departure of the leader of the "bulls" - Eduard Spertsyan. Recall that journalists insistently talk about the fact that PSV is interested in the player of the Armenian national team. The scouts of the Dutch club are allegedly already watching the midfielder in Dubai. The media also write that PSV is exploring options for a possible move for Spertsyan to Eindhoven. Scouts communicate with the footballer himself, however, they are going to arrange the transition of the 22-year-old midfielder in the summer.

It is also reported that Fiorentina is interested in Spertsyan. Allegedly, the Italians wanted to sign the player last summer, but the midfielder turned down the offer because he promised to play the 2022/23 season with the Citizens. In Florence, they want to try again - to sign Spertsyan this summer.

Feyenoord also entered the fight for the Krasnodar midfielder. The Dutch also see the player as a potential addition in the summer. Some journalists have gone so far as to woo an Armenian to Real Madrid, but such rumors look very unrealistic. Recall that Transfermarkt estimates the value of the midfielder at nine million euros.

Krasnodar, as well as the other clubs mentioned in this story, does not comment on the interest in the football player. Journalists assure that now Spertsyan does not intend to leave the "citizens" camp - he is focused on the successful performance of the team in the spring part of the season. Naturally, the club does not want to let go of its leader. The contract with him is valid until June 30, 2026.

What's next for Sochi?

Sochi continues to prepare for the spring part of the championship. The team of Kurban Berdyev has already managed to hold two friendly games. The first one took place on the seventeenth of January at the Fisht stadium. Sochi's rival was Forte Taganrog, representing the Second League - Group I. This meeting ended with the defeat of the guests - 5: 1.

Barca scored an early goal. On the eighth minute Kirill Zaika closed the top pass of Luka Djordjevic from the left flank. Half an hour later, Forte equalized the score. An own goal was scored. Then there was a goal by Zakhar Fedorov. He confidently completed the flank pass. This is the first goal of a youth team player for the first team. In the 62nd minute, Joaozinho took advantage of the goalkeeper's mistake, strengthening the advantage of the resorts. Then Daniil Martovoy scored a goal in the 74th minute. He managed to break through the Forte goalkeeper. The fifth goal came three minutes later. Kirill Kravtsov, having received the ball on the left flank, filigree shot into the far corner of the goal.

The next match was on January 22 against Netfehimik. This meeting also ended with a confident victory. The Nizhnekamsk club featured two former players of the resorts: defender Nikita Kalugin and forward Maxim Barsov.

Neftekhimik already represents the First League, so the Sochi team had a hard time here. The guests were the first to attack. Already in the fifth minute, the attackers of Neftekhimik tried to organize a one-on-one with Soslan Dzhanaev, the attack was interrupted by Vanya Drkusich.

Sochi did not immediately manage to seize the initiative. But in the end, Joaozinho, and then Georgy Melkadze, began to create dangerous chances at the opponent's goal. Only at the end of the first half, the hosts managed to open an account. Timofey Shipunov received the ball in the center of the penalty area, shot it into the right corner of the Neftekhimik goal - 1: 0.

The second half started with a goal by Djordjevic. The striker closed the pass - 2: 0. Here it became easy for the "leopards". They calmly controlled the situation, and in the 62nd minute they also earned a penalty. The penalty was successfully converted by Djordjevic - 3 : 0. This score became final.

On this, the first gathering of the Berdyev team ended. The players got some rest. Already on January 25, Barsy will go to Abu Dhabi, where they will hold the second stage of the winter training camp. In the capital of the United Arab Emirates, Sochi will play first on January 29 against the capital's Lokomotiv, and then take part in the Winter Cup of the Russian Premier League. There, the rivals of the "leopards" will be "Krasnodar", "Rostov" and "Spartak". The first opponents in this tournament for the Berdyev team will be the “black-greens”.

The Sochi club has not yet shown external activity in the transfer market. So far, the "leopards" have only extended the contract with midfielder Christian Noboa. The agreement was signed with the 37-year-old football player under the "1 + 1" scheme. The Ecuadorian is the leader of the team. He has been defending the colors of Sochi since the summer of 2019. Last season, the Russian Football Union recognized him as the best player of the season. Speaking for Sochi, Noboa scored a total of fifty points in the "goal + pass" system.

No information has yet been received about any acquisitions of Sochi. The other day, a rumor appeared in the media that the “leopards” want to acquire the midfielder of “Venice” Denis Cheryshev. But the general director of Sochi, Dmitry Rubashko, said that the club was not interested in this player. It often happens that until the very signing of the contract, the club management denies any interest in this or that football player. Of course, Cheryshev would be a great reinforcement for Sochi. Born in Russia, the football player played in Spain throughout his career, was brought up and played in Real Madrid (Madrid), played for Sevilla, Villarreal, Valencia, was the winner of the Champions League and the Europa League. Yes, now the career of the 32-year-old player is on the decline, but he is still good for the Russian championship. Rumor has it that in 2020 Cheryshev wanted to buy Krasnodar, but then the footballer turned down the offer, as he expected to stay at Valencia. There were also rumors that the Russian did not accept the offer of Zenit and one of the Moscow clubs - Spartak or CSKA. Cheryshev moved to Venice last year as a free agent.

"Kaluga" lost to "Chernomorets" in a friendly match

SKA lost away to Metallurg with a score of 3:2