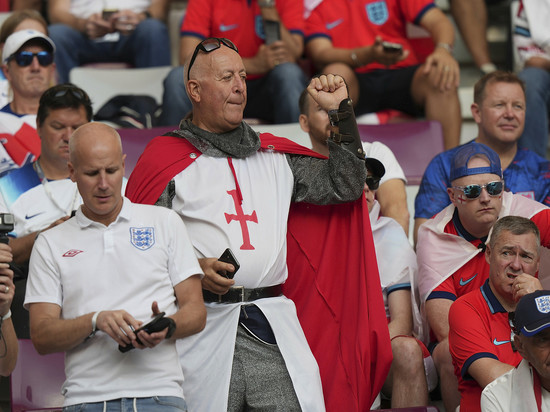 English fans in Qatar have been banned from dressing up in medieval outfits with a red upright cross of Saint George for a World Cup match against the United States because the crusaders' clothing "insults Muslims". England fans dressed as crusaders have reportedly been denied access to games due to clothing choices.

Fans from England dressed as crusaders are not allowed to the World Cup matches in Qatar because their costumes are considered "offensive to Muslims".

According to the Daily Mail, two "knights" in fancy dress - wearing chain mail and helmets with a red cross of St. George - were allegedly seen on social media trying to get through security ahead of England's match against Iran on Monday.

The couple, who also carried fake swords, were allegedly escorted out by four officers at the security gate before the game began.

A similar experience can be expected for those attending today's match against The Times newspaper reported that Three Lions fans were banned from dressing as "Christian invaders" (i.e. crusaders).

This is due to the fact that fans from England, who for a long time in previous World Cups supported the team by wearing clothes with the cross of St. George - the country's patron saint - this time faced problems because of this symbolism.

FIFA and anti-racist groups say that dressing up as crusaders in an Arab country like Qatar could be considered offensive given the historical context.

Some residents of Doha seem to have been upset by the choice of attire, given that the religious wars between 1095 and 1291 involved European crusaders taking over lands and holy sites under Islamic control.

A contemporary crusader spoke to TalkTV following England's 6-2 victory over Iran on Monday: "The problem in places like Qatar, the fans are the essence of the game. We are what makes the game. These are not corporations, they help financially in the background, it's us fans who make football and we are football." He said they were staying at the fan park paying £250 a night.

FIFA stated: “Crusader costumes in an Arab context can be offensive to Muslims. That's why fellow anti-discrimination teams are asking fans to wear inside out or change."

Kick It Out, a campaign group to combat racism in football, said: “Some outfits, such as fancy dress costumes depicting knights or crusaders, may not be welcome in Qatar.

Researcher Robert Carter tweeted: "Clothing with swords and crosses is offensive because of the crusaders' history of rape, massacre and occupation of Arab lands."

But some England fans in Qatar noted that a jubilant Saudi Arabian fan was apparently allowed to brandish a real three-foot scimitar in jubilation among the crowd outside the stadium following his team's shock victory over Argentina.

The most famous crusades took place between 1096 and 1291, when Christian armies fought to capture Jerusalem and its environs from Islamic rule.

Footage from Qatar before and after the England game shows one group of fans dressed as knights singing "God Save the King" and storming the stairs on public transport. Some locals were shocked by their choice of outfits, while others, on the contrary, asked them to pose for a selfie.

Meanwhile, bars in Doha are demanding that fans in traditional Arab robes and headdresses take them off for fear it will offend locals and offend Islam. Traditional Arab clothing has become popular with foreign fans and is widely sold in the colors of the teams from the 32 countries participating in the tournament.

The latest incident follows days of growing criticism of Qatari police over fan abuse as scandal continues over 'rainbow' symbols in the Gulf state. Fans and journalists from around the world have reported officials confiscating various items with the motif, including T-shirts, panama hats and flags.

The sale of beer was also banned from stadiums in a stunning twist just before the start of the World Cup by Qatari officials, leaving many fans angry.

The Emir of Qatar, Sheikh Tamim bin Hamad al-Thani, demanded that all visitors "respect our culture", and the fans had to abide by the rules and cultural practices of the Gulf State.