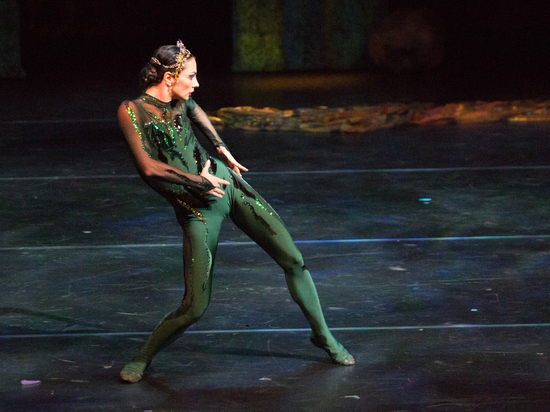 Unshed tears of the Mistress of the Copper Mountain

The Gzhel Dance Theater showed its first premiere this season - Ural Skaz. Mistress of the Copper Mountain" based on the works of Pavel Bazhov. This topic is not new for ballet, but for the theater of folk dance, the staging of an integral story two-act performance is a rarity.

The Tale of the Stone Flower to music by Sergei Prokofiev was first staged at the Bolshoi Theater in February 1954. Initially, the idea of ​​a ballet based on the plot of the Ural tales by Pavel Bazhov "The Malachite Box" (1939) was proposed to Prokofiev by the choreographer Leonid Lavrovsky. The approach to the new production turned out to be overloaded with the principles of the "realism in ballet" then being implanted. The performance was constantly remade, and as a result - a resounding failure. A few years later, in Leningrad, the young choreographer Yuri Grigorovich turned to the same topic, behind whom at that time there were only two performances in an amateur group. And it was his "Stone Flower", staged together with an experienced set designer Simon Virsaladze and released at the Kirov (now the Mariinsky) Theater in 1957, that became a turning point in the development of Russian ballet. Subsequently, this production was transferred to the Bolshoi Theater, it went and goes on the stages of many Russian theaters. The production also had imitators. However, in the future, despite its popularity, the theme was not developed in the ballet.

And now, many years later, choreographer Konstantin Uralsky turned to her. The author of such performances as Andrei Rublev, Waltz of the White Orchids, his version of the ballet Carmen,. This is a classical choreographer, he headed such foreign and Russian companies for many years, and therefore used in his new creation vocabulary that is not typical for a folk dance theater. To create a new ballet, he ordered a musical score from the composer Kirill Volkov. The production designer was Alina Yakovleva, and the costume designer was Olga Glazunova. Uralsky wrote the libretto for the performance. The content of the new ballet is approximately the same as Grigorovich's, although the image of the Stone Flower is not here: the main characters are also a couple of lovers, there is a clerk who counteracts their happiness, a typical figure in Bazhov's tales. The Mistress of the Copper Mountain herself is present here. But the names of the main characters are different - Stepan and Nastya. And in order to make the story more understandable to the viewer, the choreographer changed their fate, making it similar to the fate of the well-known Bazhov heroes - Danila the Master and Katerina.

The new hero of the ballet, Stepan, a serf working at a mining plant, is also one of the characters in Bazhov's tale. But unlike Danila the master, who loved his Katerina and freed her betrothed from the spell of the Mistress, Bazhov's Stepan is really in love with the stone maiden. Having met her in the forest, he fulfills the request of the Mistress, for which she promises to become his wife. However, Stepan does not marry a sorceress, as he promised to marry the orphan Nastenka. When Stepan dies in the forest, they notice a large lizard near him (this is the Mistress of the Copper Mountain), which cries at his body. In the hand of the late Stepan they find precious stones - the tears of the Mistress. Uralsky's ballet tells a completely different story, similar to the story of Danila the Master and Katerina in Grigorovich's ballet. This makes the ballet easy to understand, familiar with this fairy tale since childhood. But on the other hand, it deprives the choreographer of the opportunity to create a more complex narrative. However, ballet is not literature. He has his own laws. And here it is impossible not to note the freshness of the dramatic solution. The episodes in the "Ural Tale" are not drawn out, they fit one to the other seamlessly. As a result, tension is created, well moving action.

Present in the new ballet by Konstantin Uralsky is the figure of a storyteller, which Bazhov also has. The prototype of grandfather Slyshko, watchman Vasily Khmelinin, once introduced the young writer to the Ural legends. The watchman sprinkled his speech with the word "hear-to." Hence the nickname. In the ballet, the part of the Narrator was colorfully performed by Dmitry Tolmasov. Tatyana Mokrizskaya (Mistress of the Copper Mountain), Evgeny Pshenichnikov (Stepan), Angelin Kondakova (Nastenka), Konstantin Elagin (Bailiff) are also good in their roles. Uralsky's performance is notable for its musicality and polyphony. The choreographer brings to his ballet a synthesis of different dance styles: in addition to the usual pop-ups and round dances for folk dance, there are elements of classical dance, hip-hop, and acrobatics. At the same time, elements of the Ural dances are used, such as "captures", or characteristic "prickly" movements. Moreover, Uralsky combines all this logically. Previously, the folk dance theater existed more as a divertissement genre: concerts from small numbers. Now, before our eyes, a new type of performance is being born, designed for the folk theater.

Newspaper headline:
Unshed tears of the Mistress of the Copper Mountain

"The spectator should also be the creator of the performance": Spesivtsev told the secret of the theater's popularity